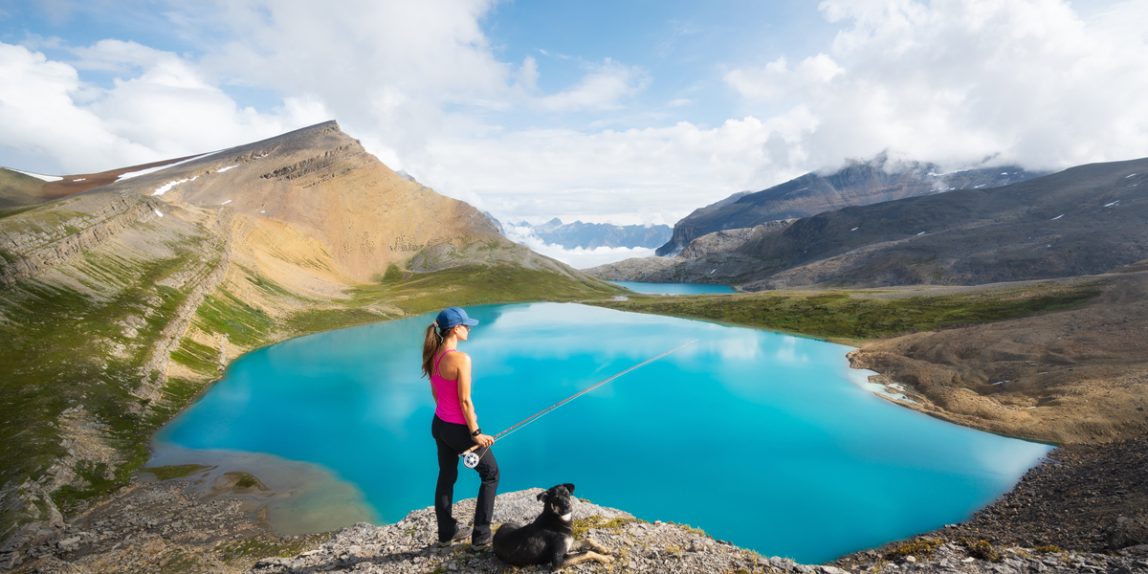 High in the mountains on the edge of The Canadian Rockies lies the best fly fishing adventure in Alberta, chasing down the rare and elusive golden trout. Getting there is as much of a challenge as landing one of these beauties. I recommend you take the short helicopter flight with Rockies Heli based at Abraham Lake in David Thompson Country. The alternative is a long strenuous overnight hike with all of your gear on unmarked trails via Owen Creek. Once there you will not want to leave. The glaciated mountain setting for fly fishing is simply unmatched. A fitting arena for testing your skills against this bucket list fish.

Remote high altitude South Eastern Alberta lakes are the only place in Canada where golden trout are found. They are not in BC, and these are also likely the most Northerly populations in existence. They are a native species to the Sierra Nevada Mountains of California and are stocked elsewhere now including right here in the Canadian Rockies (in a small handful of lakes between 6500-8000ft).

The Alberta record for a golden trout is 4 lb 6.5 oz (in Barnaby Ridge Lake). At Michelle Lakes they are abundant but also quite small with anything larger than 35cm considered a trophy. Back when it was first stocked in Michelle lakes in 1977 the average fish size recorded shortly after (in the early 80’s) was right around that mark as they grew quickly. I’d expect it is much smaller now as their growing season is short and adaptation and competition have increased. It is unlikely that they will be re-stocked from fish outside of Alberta again so the few lakes with golden trout here will be all that we will ever have for recreation and replenishment purposes!

They are a beautiful fish with males having crimson/olive gold flanks and females a ghostly grey blue diffused with lemon yellow. Their mouths and fins can be a deep, brilliant pumpkin. These colors are striking in contrast to the glacially aqua-colored lakes they inhabit increasing the aura surrounding a fishing session at Michelle Lakes.

Michelle Lakes, a prime fly fishing adventure destination in Alberta, are open for fishing from August 1st – October 31st each year and the keep limit is 2 by size (all under 35cm must be released). That means you can only keep a trophy!

The Fishing gear we used to help us land 22 golden trout on August 10th 2019 included:

“We were very fortunate to have plenty of sun which made it both easy and exciting to see the tiny trout cruising around the shallow waters which border the deep blue drop offs. Since the trout are so small, the rises look like drops of rain hitting the surface.  It is important to cast 6-8 feet away from the trout in the direction they are moving, sometimes they will take the fly, some times they will check it out and then slowly turn away and swim in the other direction”.

It is not unusual to come away from the area without much success. The golden trout take their time eyeing up the bait before approaching it so casting right at them doesn’t work well. Leading them in and being patient is a better approach. Even then most of them will throw the hook before you can land it.

As Dave Jensen notes, “the golden trout experience is not about trophy trout and bragging rights. Rather it is the moment to moment enjoyment of the crown jewels of trout in a majestic and pristine Rocky Mountain wilderness”.

Michelle Lakes – the setting for your fly fishing adventure in Alberta

Make sure to bring suitable clothing as thunderstorms and an afternoon shower or even snowfall are common up at Michelle Lakes. Lots of layers and waterproof outer wear are necessary! We had a tarp rigged up against a rock ledge to take refuge under if necessary and it came in handy as we watched a lightning storm pass by and had a couple of hours of rain as well. We also had two tents between us for our overnight trip but the tarp was great for us to all continue hanging out together during the day while waiting out the storm.

Being prepared for your bucket list fly fishing experience is very important as once you are dropped off you are on your own unless you hire a guide.

Rockies Heli also offers drop offs at other lakes in the region for fly fishing for different trout types and sightseeing helicopter tours over the best parts of the Canadian Rockies including Michelle Lakes. See the images below for more details or give them a call at 1 888 844 3514.

Our overnight fly fishing experience at Michelle Lakes with ‘Carl’

Who is ‘Carl’? Well he’s a puppy! A well behaved 1 yr old rescue dog – a Shepherd, Rottweiler, Lab cross that we occasionally look after. He joined us in the helicopter on this adventure instead of staying at home providing great company and endless photo opportunities while we were fishing and relaxing around Michelle Lakes. Once Carl was fitted with his new flight backpack our adventure began. An incredible helicopter flight followed with inversion clouds below us engulfing the peaks and partially shrouding the lakes. Thankfully our experienced pilot, and owner of Rockies Heli, Ralph, knew conditions were still safe for flying and dropping us off. We got in through a back pass where we spotted several bighorn sheep and landed at the lower lake where the golden trout were reported to be biting. A previous group landed some 150 golden trout so we were eager to say the least.

Over the next day we caught and released 22 golden trout, celebrated an engagement, enjoyed a birthday cake under a tarp in the rain, and hiked around the nearby mountain sides to our hearts content. All the while Carl would always join the most active participant in the group to be at the fore front of any fun-having.

When it was time to be picked up the following day Ralph arrived landing the helicopter at the upper lake dropping off a group whose daughter the lakes are named after. He then took off, arcing around and bringing the helicopter in expertly beside us at the lower lake and we were whisked away on the return flight. This time we jetted over the head-wall from which Lower Michelle Lake empties out as a 1000ft+ waterfall and 9 minutes later we landed beside Abraham Lake at the Rockies Heli base. Carl was quietly impressed with the whole adventure and gave it 5 out of 5 paw prints on his follow up TripAdvisor review.

Contact us here at Mountain Photo Tours if you are looking for a helicopter based photography experience. This could be an overnight camping adventure to Michelle Lakes to photograph the golden hours and night sky, a day trip heli hiking, or even a heli wedding or engagement shoot! Let us know what you are looking for. I would be thrilled to be your guide or photographer! Contact us using the form below to make your inquiry;

Thanks for reading about this unique Alberta based fly fishing adventure! You can sign up for our mailing list to hear about upcoming photography tours and workshops in the Canadian Rockies below;