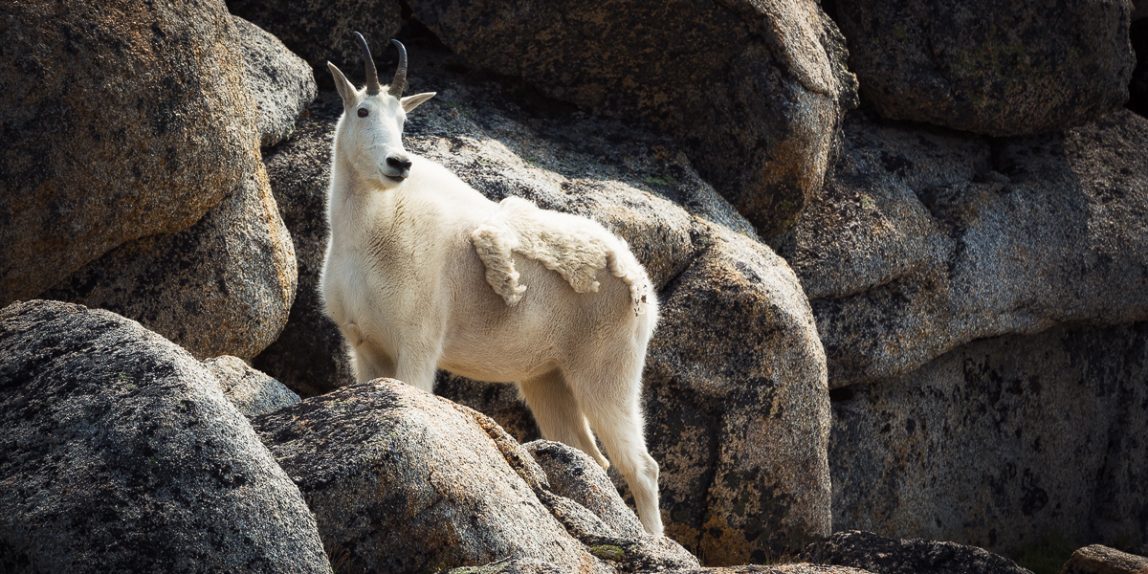 Arriving home from a couple of weeks in Iceland recently I was itching to get out and photograph the brief display of fall color that we receive in The Canadian Rockies between about September 15-30th each year. I have a long ‘larch list’ (it keeps getting longer but fall is so short) and feeling a bit run down I chose an easier objective for this day, “The Devils Thumb”. A short off trail hike that extends above the Big Beehive near Lake Louise in Banff National Park. I’ve been up the Thumb maybe 4-5 times over the previous 10 years but never at this time to see the alpine larch trees which consume the top of Big Beehive. Viewed from above I knew I was in for a great show of yellow, I just hoped for some moody weather, mist, or spot lighting which would make the scene even more interesting. The weather outlook was bleak at best but I wasn’t concerned with the photography so much as stretching the legs. That’s the usual approach and it means I’m always surprised, and never holding on to too many expectations.

That I would be surprised with the events that followed was a huge understatement.

Alone, I cruised past Mirror Lake and Lake Agnes and on up to Big Beehive marvelling at the colours and stands of larch growing on countless ledges above. I paused once to refill my water bottle at the inflow of Lake Agnes. Snow everywhere but a nicely packed trail existed. It was mid-afternoon and the plan was to stay up in the area for sunset if there were a few holes in the cloud cover. I had plenty of warmth for an extended time of possibly waiting idle. A side goal for this trip had been to investigate a narrow gully system that I thought could provide some dramatic framing of Mt Lefroy. I noted it as I passed along the Eastern side of the Devils Thumb – access from below looked fairly easy. Something for the way back.

As I approached the final ascent gully (a winter avalanche gully that had boot high snow in it currently and presented a slip hazard) I reminisced about a past trip here with my friend Kira and how we had encountered a mother mountain goat and her tiny baby goat kid – and how she had aggressively approached us. We had backed off until they had both moved on. I was told by a local naturalist afterwards that a mother mountain goat is extremely dangerous. Rounding the final bend was like deja vu as there stood a male mountain goat in almost the same spot feeding on grasses poking through the snow. Just like that other time the goat stood to attention and took immediate interest in me. Great! Serious horns and a muscular frame, I knew I was in trouble if I didn’t back off. He approached closely, established the high ground, and peered at me, as if to say ‘I dare you to take another step!’. I put a tree between me and the goat which seemed to satisfy him and he went back to munching grass erasing me from his memory. I worked around behind a couple of trees and carefully entered the steep avalanche gully awkwardly making a wide arc towards the other side of it around the goat. It was very slippery with the snow and not a lot of purchase for my boots. I eyed the run out below – a significant unarrestable slide lay in wait if I slipped. Using all fours I worked my way up the gully. I heard a noise in the bushes and assumed it was some more of the goat family. Tracks were all over that side of the gully. I pushed more to the centre of the gully due to the noise and to rejoin a more step like trail that I could make out in the snow. Now I was out of sight of the goat and slightly above him. Good. That was a lot of extra work! I contemplated traversing over above him and photographing him with an epic mountain backdrop (Haddo, Aberdeen, The Mitre, Lefroy and Victoria) – wildlife and landscape photography infused. Unfortunately the gully steepened enough on that side & I eyed up the drop again and discarded the thought turning back uphill on that lightly tracked step like trail.

The moments that followed were a blur as a large brown animal burst from the trees lining the far avalanche slope, looking straight at me, grunting, and picking up speed. I realized within a very long split second I was looking at a grizzly bear in full flight with its hump and pin small eyes recessed in its large dish shaped face. It was odd seeing it from a front on angle without the side profile that I’m used to seeing from a vehicle in most of my other grizzly bear encounters. It looked very aggressive and I nearly passed out from a huge adrenaline rush. My heart rate went as high as it could and afterwards I realized it was the most scared I have been in the mountains. No trees to climb, it would be on me in the next two seconds……..and NO BEAR SPRAY! I usually carry it but for some silly reason I didn’t have it on this day. I’ve never made that mistake again, ever. I was completely helpless, the steep snow filled gully meant I couldn’t move anywhere easily or quickly. I motioned towards the nearest shrub, looked over my shoulder, and watched. Its all I could do in those seconds. The grizzly bear cannon-balled into the avalanche gully, towards me, menacing, but then to my whopping relief angled slightly downwards below me straight towards the goat who I had forgotten about. The bears side profile and full strides were right in front of me a mere 10 metres away, below, ripping by, and then out of sight behind a small ledge buttress. I turned and ran uphill as fast as I could. A couple of seconds and I glanced below now seeing the goat again. It was looking over its shoulder then springing into motion turning and sprinting off. The grizzly bear immediately appeared metres behind him at full sprint and the chase went out of view around the corner. I turned and continued running uphill in fits and bursts from small bush to bush always looking back half expecting a bear head to pop up, spot me, and give chase. In that moment another noise came from above me…..

A female mountain goat and its kid ran out from above and continued down into the avalanche gully, past me, and down in the direction of the grizzly bear and mountain goat encounter below. Very strange – I think they were disturbed by my presence and hurried actions and were not aware of the drama unfolding below but it actually appeared like they were running to help the male mountain goat. Not likely I have been told. I felt like I was in the middle of a wildlife documentary. Now reaching the col just minutes from the summit my tension eased a bit. I contemplated that my way back off the mountain was now possibly extremely dangerous had a goat kill occurred as it was directly on the path and the only real way back. Grizzly bears defend their kills ferociously. I started making a few phone calls at the summit including obtaining Parks Canada’s emergency numbers if I needed them. My choices boiled down to 1) calling in to Parks which would have probably triggered a helicopter rescue or atleast a fly by to check what I couldn’t see below, 2) Go back cautiously. Not a chance! That bear was so quick and behaving like a predator, or 3) Descend off the Thumb a different way. I chose the latter with the phone call my next choice if needed. A little less dramatic and besides I felt I had a decent chance of safely extricating myself from this situation and still had enough daylight to work with more than one plan if needed. The West side offered a gully option and a friend texted me a picture of that side. A bit too risky with the new snow in my opinion. I went for ledges off the East side that would feed me hopefully into that narrow gully I had eyed up for photos on the way up. A quick look at the view I came for and I was off breaking trail in the snow and carefully descending always staying within my comfort zone and only descending what I could climb back up if it didn’t go. It graded into difficult scrambling but still comfortable with care on the blocky terrain. I found the top of the gully but it was blocked by another mountain goat! It came towards me – come on mate let me off!. Since I was now on ledges with exposure this bothered me. I was in its territory and it wouldn’t take it much to knock me off. I started clapping with my snow gloves and thankfully this caused the goat to turn and descend away and down into the gully where I wanted to go. I followed, herding it here and there with some claps. The gully turned out to be the only way off as everywhere else cliffed out and being wet and snowy it was the crux. Luckily being tall it made the down climbing easier and eventually well into it I saw I was now with a safe way back. I snapped a few quick photos of the gully & Mt Lefroy (see below) and then waited a good ten minutes at the exit to the gully, calling every minute and making noise before regaining the Devils Thumb trail below, now ahead of where the encounter occurred.

Back to the Beehive, I called the encounter into Parks and then set off home. A real eye opener of an afternoon, zero photographs of larch trees on the camera sensor, and a lot more than I bargained for when I set out from the busy Lake Louise shoreline a few hours earlier. A close encounter with a predatory grizzly bear who had mountain goat on the menu before hibernation! This experience was seared into my sensory system, oddly making me love The Canadian Rockies even more for how much it leaves me in awe, and feeling alive……I can thank the tastier looking sacrificial goat for that anyway.

Thanks for reading a tale from the trail! The fall out from this was that the mountain goat I believe got away – no closures were implemented by Parks Canada the next day which was a good sign for the goat. This grizzly bear encounter also made a small side note in a Rocky Mountain Outlook (local newspaper) article on how Grizzlies have been exhibiting this rarely observed behaviour of preying on mountain goats in a few places close to Lake Louise recently.

Parks Canada mountain safety contact information is here – https://www.pc.gc.ca/en/pn-np/mtn/securiteenmontagne-mountainsafety/contact – Note this information down before heading into the backcountry as well as leaving a detailed itinerary and expected return time with somebody.